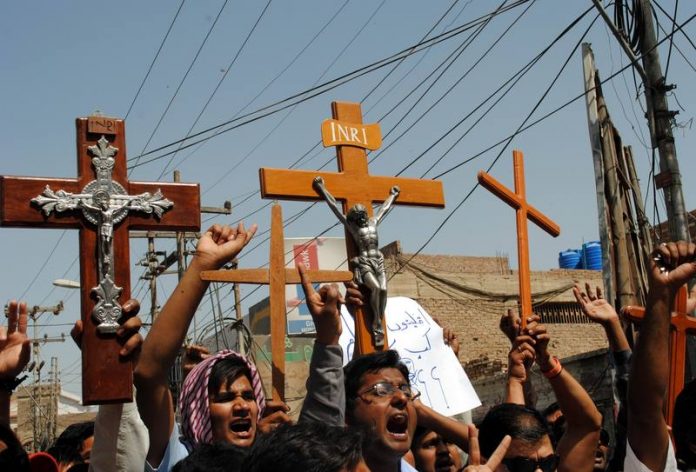 Family members of two Christian boys who were shot dead by local influential people, staged a protest demanding justice and protection. The family was joined by local Christian community as well. Details emerged that on May 5, Rajish Bhatti and Naqash Bhatti were shot dead by two boys hailing from a local influential family. This protest was staged outside the Saddar police station in Wah.  The protestors were carrying placards with slogans like:

‘Christians lives matters’, ‘Maseehi Aqlieeat ko Insaf Do’, ‘Save Christians in Pakistan’, ‘We Want Justice’ and ‘We Need Peace in Wah Cantt’.

The family of the deceased claimed that they are forced to live in fear. The family of the murderers is influential in the area. “We are living under threat and fear as the suspect is influential and still at large,” they said. They said that they had been striving to get justice. Police have not arrested the alleged murderers despite the fact that a video of this incident has been provided. Police asserted that an FIR was registered invoking sections 324 and 34 of Pakistan Penal Code (PPC). It was said that suspects are on interim bail for that reason they have not been arrested so far. The police assured the protestors that swift action will be taken into this case and protection will be provided to the affected family. The mob was thus peacefully, dispersed.

Afghans Are Protesting to Keep the National Flag Despite the Taliban’s...