According to the Times of Israel 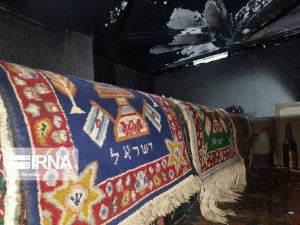 early Friday morning at the site of an ancient shrine revered by Iranian Jews as the burial place of the biblical Esther and Mordechai, stressing that no damage was done to the hall housing the tomb itself.

to enter the holy site through an adjacent bank and “perform a series of actions” but “failed,” opposition news sites said, citing a report in the state

The report said the cameras had registered the person’s face, but “information about the person’s motives and identity cannot be provided until they are arrested.”

The IRNA report was deleted from its website two hours after its publication Saturday morning, the Radio Farda and Iran International websites said.

The attack came on May 15, the day after the 72nd anniversary of the founding of the State of Israel and marked as Nakba Day, or the day of catastrophe, raising widespread suspicion that it was a hate crime against Jews and the Jewish state.

Some of the wires and a carpet in a side building were burned but the shrine itself appeared not to have been touched by the fire, he said, adding that there were no injuries. “

Abduction and forced Conversion of Christian Girls,has No limits in Pakistan