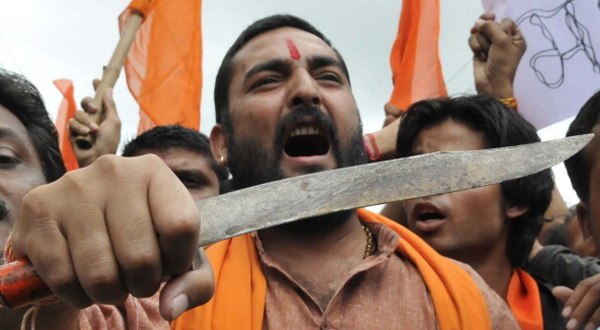 Hindu nationalists in India have falsely accused Christian missionaries of being behind the lynching of two Hindu priests, placing the country’s already-persecuted Christian minority further at risk.

According to UCA News, A Hindu leader has accused Christian missionaries of being behind the lynching of two Hindu priests, but a church leader dismissed the claim as part of a conspiracy to tarnish Christians in India. Hindu leader and parliamentarian Rakesh Sinha used a live debate on national television to claim the lynching was the handiwork of Christian missionaries” and the Communist Party of India (Marxist).

Sinha’s allegations came five days after a mob beat to death three people – two Hindu priests and their driver – on April 16 in Gadchindhali village in Maharashtra’s Palghar district.”Why is Sinha not providing any evidence to prove his charges?” asked Archbishop Felix Anthony Machado of Vasai, which covers the area where the murder happened.”

It is part of a conspiracy to defame Christians” and an “attempt to communalize” the incident at a time when the country is “fighting the deadly global pandemic,” the prelate told UCA News on April 22.

Archbishop Machado, who is secretary-general of the Catholic Bishops’ Conference of India, maintained that the state’s Chief Minister Uddhav Thackeray had clarified that the killings had no sectarian angle. “There are no Christians in the area where the trio were killed,” he added.

‘Planned mob attack’ Sinha did not present any evidence for his allegation but said Hindus would not attack saffron-clad Hindu priests unless caught in immoral acts.

He also said a mob of some 200 people could not come together late at night without being organized by a leader. The priests did not roam around the village. They were passing on a vehicle, he said, stressing that it was an “organized murder.”

Thackeray told media on April 20 that the Hindu priests were traveling from Mumbai for a funeral in Surat city in nearby Gujarat state. State police, however, stopped and sent them back, but they took a detour and proceeded through a village road.The villagers attacked them after taking them for child smugglers, he said.

But Sinha, a senior member of the pro-Hindu Bharatiya Janata Party (BJP) that runs the federal government, insisted it was a planned murder involving Christians and communists.

“A probe will prove it. But I’m making an allegation,” he said without providing any evidence to support his claim.

Archbishop Machado said Christians have been facing such accusations for a long time “but the truth will prevail.”

Christian leaders say the BJP and Hindu groups supporting it have regularly blamed Christians for violating laws to project them as criminals to keep villagers and tribal people away from missionaries.

Hundreds of police cases have been filed against Christian leaders across northern India, mainly since the BJP took power in New Delhi in 2014

‘No plan to complain’

Archbishop Machado said he would not lodge any complaint against the baseless allegation of the Hindu politician. It is their strategy to “speak a lie time and again and convince the people it is true,” he said.

A complaint to the BJP leadership would not have any result as they would disown Sinha’s claim as a personal opinion, he added.

The communists, however, said they plan to file a complaint “against the canard.”

Communist leader Badal Saroj said police arrested 101 people in connection with the lynching and 72 are members of Sinha’s BJP.

Besides, “the BJP is running the local village body under which this happened,” said Saroj, joint secretary of the communists’ farmers’ union, All India Kisan Sabha.

“They first blamed Muslims, and now they are blaming a left-wing party and Christians with an ulterior motive to whip up communal passion,” Saroj said.

Christian tribal leader Prabhakar Tirkey said the allegation is part of “a well-orchestrated attempt to whip up communal frenzy in the country.”

“If not nipped in the bud, it will kill more people than the Covid-19 infection,” said Tirkey, national president of Rashtriya Isai Mahasangh, an ecumenical forum of Christians.

The BJP occasionally whips up such passion to project itself as the champion of Hindu causes to retain its political prominence, Tirkey said.

The BJP has not yet reacted to Sinha’s allegation.

ISIS Terrorists Kidnap a 3 Year Old Girl and Warn the...