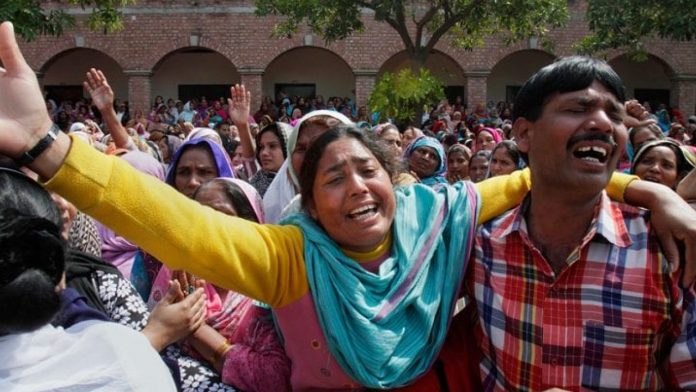 Pakistan is getting more and more dangerous for Christians and other religious minorities. Christian Persecution and discrimination is an everyday event in Pakistan and often Government seems helpless in defending its minorities.

On 9th May, around 12 PM, another Church in Pakistan was attacked by the extremist mind Muslims in Kala Shah Khako in Sheikhpura District of Punjab, Pakistan. Pastor Samuel Hadayat who runs the Church in the small village stated:

“At around 12:00 PM when we were in the Church, few of the local Muslims led by Awan Abbas and Ali Shan entered the Church Compound with dozens of armed men. They were chanting slogans’ Allah Ho Akbar and today we will destroy this Church.’’

They destroyed the main gate and Compound wall and desecrated the cross after breaking it.” he furtherly added.

While they were breaking in, the local Christians Called the Police helpline for support, luckily the police reached on time. Although this has been observed that the Police always support the Islamic intruders, this time, realizing their responsibility, they protected the Christian community. Immediately, Police registered an FIR against the Culprits, although No arrest has been confirmed yet.

We would request you to please keep Praying for the Christian in Pakistan.

Rokhsareh (Mahrokh) Ghanbari Charged with A Threat to National Security and...