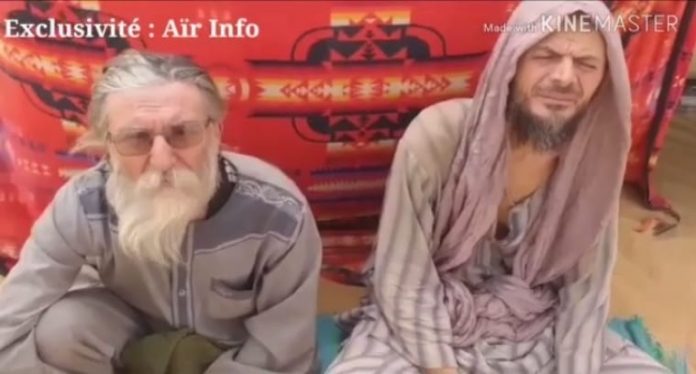 NIAMEY, NIGER (BosNewsLife)– Islamic militants have shown a video of an Italian priest who was kidnapped in Niger in September 2018, in the first proof of life since his abduction, Catholic aid workers confirmed.

Catholic charity Aid to the Church in Need (ACN) said it saw the 23-second video featuring Pierluigi Maccalli earlier this month. ACN quoted his brother and missionary priest Walter Maccalli as expressing “joy” and “surprise” that he was still alive. “It’s great news, and we are delighted and hopeful that everything may turn out well.”

A brief video shows Pierluigi Maccalli sitting on the ground with Nicola Ciacco, an Italian tourist who was last known to be cycling from Timbuktu to Douentza in neighboring Mali.

The footage of the priest is date stamped 24th March 2020. Aïr Info newspaper, which first obtained the video, said the two men were held by Jama’a Nusrat ul-Islam wa al-Muslimin’ or ‘the Group for Islam and Muslims.’ It is known as a Salafist hardline group founded in Mali in March 2017.

The 59-year-old Maccalli is an Italian missionary with the Society of African Missions (SMA) organization.

In published remarks, SMA’S Italian Provincial Superior Ceferino Cainelli said that they and his home church were continuing praying for the priest’s release. “The pain caused by the absence” of priest Pierluigi Maccalli, “after a year and five months of his kidnapping, is very much felt,” he said.

Pierluigi Maccalli was seized Bamoanga, a village some 125 kilometers (78 miles) from Niger’s capital Niamey, said Catholic missionaries at the time. Several Western aid workers have were kidnapped in Niger in recent years.

Niger is a predominantly Muslim country, where between one and two percent of the inhabitants are Christians in a population of about 20 million, according to official estimates. The Torodi region, where Maccalli was abducted, has the most significant number of Christians in the West African nation