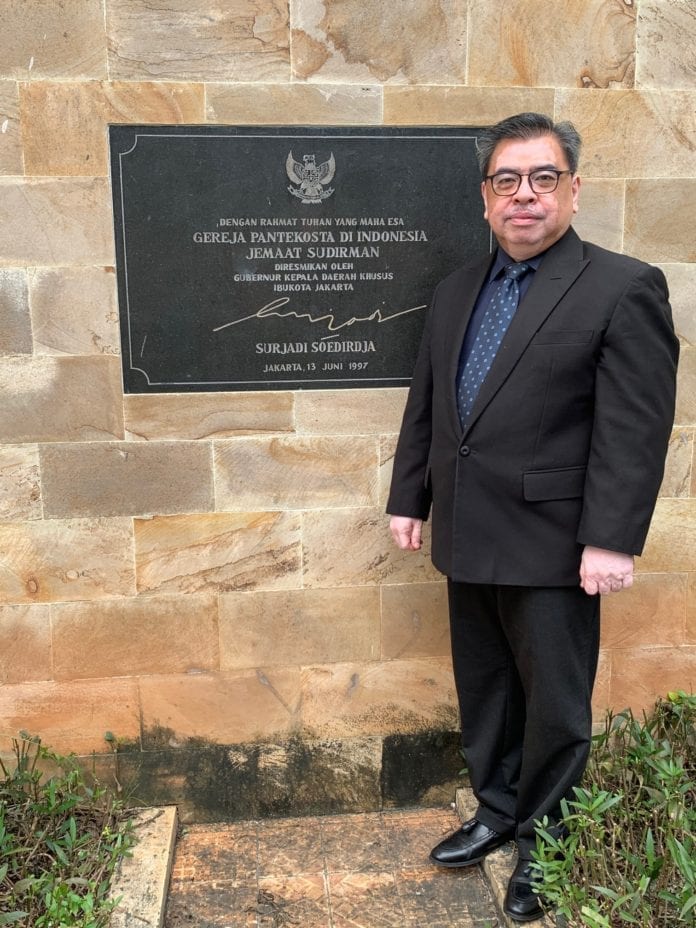 pastor of Jakarta’s largest Pentecostal churches where many Muslims convert to Christianity. “I thought I could remain an architect and an engineer. But God had different plans,” the 52-year-old preacher told BosNewsLife in Indonesia’s bustling capital.

Tumbelaka’s 300-strong GPdI Sudirman Church in South Jakarta is part of the Pentecostal Church in Indonesia or ‘Gereja Pantekosta di Indonesia’ (GPdI) denomination. Amid growing demand, the architect-turned-pastor also runs a smaller congregation, the ‘GPdI Bojong Indah Church’ in West Jakarta. He called it “a miracle” that he received permits from local authorities to lead these two Pentecostal congregations.

Tumbelaka suggested that the two church buildings he helped design for these congregations barely accommodate the growing number of Muslims and others turning to the Christian faith. “My entire multimedia team are former Muslims. Some of them I baptized,” he revealed. “I first gave them counseling because they have to make a personal decision for Christ. I never pushed them.”

Leaving Islam in what is the world’s largest Muslim nation of nearly 270 million people is a tough decision, the pastor confirmed. “It’s not easy. As a Christian convert, you can have a lot of problems with especially family members and other relatives.”However, when speaking to Muslims seeking faith in Christ, he isn’t shying away from Biblical truth, he says.

“Because I worked in the secular industry of architecture, I usually go straight to the point. My style is straightforward. So when people come to me with problems, I tell them: ‘You can overcome your problems when you follow the instructions of the Word of God.”

During a recent crowded church service streamed on social media channel YouTube, a man carefully said the closing prayer. “He was a Muslim too,” explained Pastor Tumbelaka. “Dozens of worshippers here are former Muslims. They followed God’s ways. I think God drew them. They came and wanted to be baptized.”

Yet being a pastor wasn’t always high on his wish-list, he admitted. “I never intended to be a pastor. I was a successful engineer and architectural consultant in the government. But God thought differently about this,” he said.

It began when several years ago, his elderly wheelchair-stricken mother was no longer able to carry the torch. “My father, who was also a pastor, already passed away. He started this church as early as in 1958. But when my mother finally asked me to take over, I realized that God prepared me for this task as pastor. Because I designed and help build this church when I was an architect,” recalled Tumbelaka.

When BosNewsLife visited the spectacular GPdI Sudirman Church in South Jakarta, he made it a point to celebrate her 76 birthday with church members. The “Happy Birthday” tune and Christian songs were backed by the congregation’s neatly-dressed band members and seemingly professional singers.

Huge screens ensured everyone could follow the rhythm-filled service.

The church hasn’t always been in a celebratory mood. Local authorities even ordered the removal of a church in the 1980s. But “Ever since that day God has blessed us and provided another plot of land for this church and the other congregation. We even received permission from the Jakarta governor,” he recalled.

“Sometimes I wonder that my calling was as if God wanted to use me as the Biblical King Solomon who oversaw the construction of the Temple,”
Pastor Tumbelaka said in the interview.

“I already had designed this church as a younger man as an architect. But now God wanted me to be an architect for Him for the people. I think the Church has to be the Light among the people. We have different vocations. But wherever we are, we have to reflect the image of God.”

The married father doesn’t know whether his son will one day become a pastor. “For now, he studies architecture…”