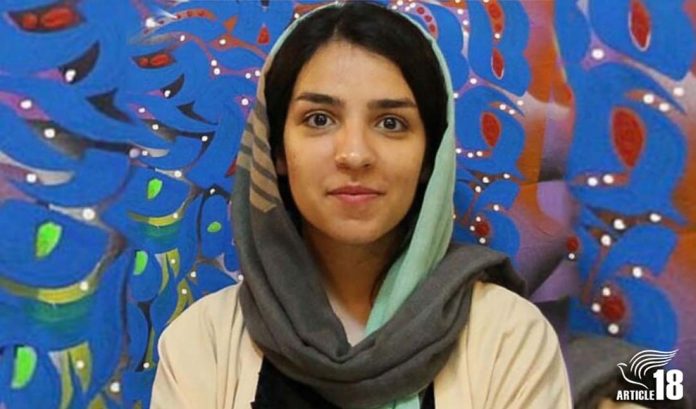 Emergency Rescue Committee- A 20 years old Christian girl convert, Fatemeh Mohammadi, was imprisoned in Iran. The future of Christianity is in a grave situation in Iran and the Middle East. Fatemeh is one of the brave Christian girls who openly talked about her rights and beliefs in a country like Iran.

Converting to Christianity is a crime punishable under the constitution of the Islamic Republic of Iran. Earlier this year, Iran’s Minister of Intelligence publicly admitted that his agency is collaborating with Shia religious seminaries in seeking to combat the perceived threat of mass conversions to Christianity across the country. In regard to this, Fatemeh Mahammadi wrote an open letter to the Minister of Intelligence in Iran. In the letter, she accused the minister and the constitution of Iran as tools used to target the Christians in Iran. She further mentioned that these actions against the Christians are a violation of Article 23 of the constitution, which states “no one may be molested or taken to task simply for holding a certain belief.”

Fatemeh Mohammadi with her bold actions, became the voice of Christians, especially for the Christian converts in Iran. On different occasions, she brought attention to the issues on social forums: why Christians are prevented from talking about their beliefs with others, while Muslims can freely engage in “propaganda” at schools, universities, mosques, and shrines. A couple of weeks ago, she was again arrested because she filed a written complaint against a woman who publicly slapped her for not wearing her headscarf. Police locked her up while setting free the assailant, she spent a night in prison and the next day was released with a warning.

In November 2017, Fatemeh Mohammadi was arrested at a house-church meeting in Tehran and was released after six months in prison on April 2018. Since then she has become the vital figure for the Christian converts in Iran.

This is the time for the International Community to rise together to highlight the plight of Christians in Iran – home churches and accepting Christ is considered as a criminal offense. Stand with us and help people like Fatemeh Mohammadi to bring change in the world and also keep Fatemeh in your prayers. Specifically, pray for her courage and safety because she has chosen to stand up as a persecuted religious minority in a dangerous environment.

Donate Now to Save Lives

Nigeria: ISIS Kills 20 Christians To Avenge The Killings Of their...

Ashraf and Teresa Rescued From the Slavery.

Christian and Religious Minorities Are Forced to Embrace Islam for Food...

We Challenged the Death sentence of Shafqat Emmanuel and Shagufta Kasuar...

We Challenged the Death sentence of Shafqat Emmanuel and Shagufta Kasuar...