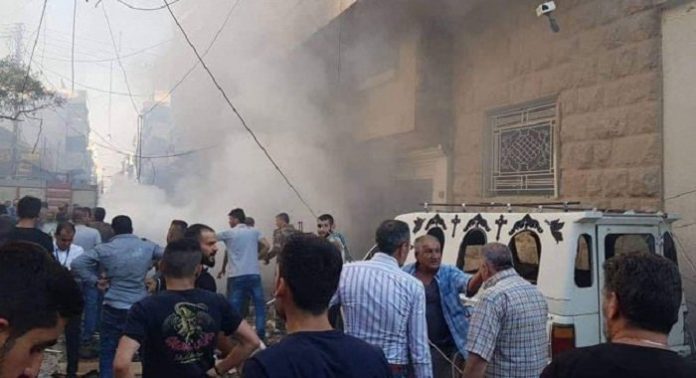 In January 2017, me and my associate Keith Davis, both were invited by the Hungarian government in their first International Conference for the persecuted Christians where 17 organizations of the world were invited to discuss the plan to resettle the Christians of Syria and Iraq.
We both strongly condemn that Christians should not be sent back to Syria and Iraq and they should not be resettled again in such countries where there is a strong threat of persecution in the future.
But few of the Churches were desperate to resend the Christians back in such countries.

Recently I read a story in the Defence post which states;

The bomb went off at the Virgin Mary church in the majority Christian district of al-Wasta, which is held by Syrian government forces.

ISIS continues to claim deadly attacks in Syria despite the loss of its last stronghold of Baghuzin March.

Qamishli, which Kurds who make up the majority in the city call Qamishlo, is the capital of the self-declared autonomous region of North and East Syria. Most of the city is under control of the Syrian Democratic Forces, a mixed Kurdish-Arab militia that is supported by the U.S.-led Coalition in the fight against ISIS, although parts of the city are also under the control of the Syrian government.

“According to our research, this attack is the eleventh in eleven days in Hasakah province and the fourth in a month in Qamishlo – the de facto capital of North East Syria, which has for some years been secure from ISIS attacks,” RIC researcher Joan Garcia said.

“As such, these attacks form part of a steady increase in ISIS-linked attacks in previously-secure, Kurdish-majority cities close to the border. This particular attack targeted worshippers leaving a church, part of the Christian minority which in Qamishlo exists peacefully alongside Arab and Kurdish communities. Similar attacks have targeted churches in Hasakah city and the Khabur region in recent weeks.”

Qamishli has been targeted several times in recent years, including by ISIS, but has seen less violence than other parts of Syria. Last month ISIS set off a vehicle bomb targeting the Asayish police force in the Qidurbek neighborhood injured several people, including an 8-year-old.

A July 2016 truck bombing claimed by ISIS killed 45 people and injured over 100, the deadliest ever attack in the city. In January, the Asayish dismantled a car bomb that had been discovered in the city.

Data gathered by the Rojava Information Center indicated two explosions in Qamishli in May, one in April, and none in March.

The attacks “can be seen as part of ISIS’ destabilization strategy,” Garcia said. “Following a heavy SDF-led and Coalition-backed crackdown in the newly-liberated Deir Ezzor region, ISIS are launching more attacks in the heart of the autonomous region. Such attacks are an attempt to sow division among co-existing peoples in North East Syria and shatter the fragile peace in the region, and we expect to see more and more deadly assaults like this in the coming months as ISIS, the regime and the Turkish state all turn the screw on North East Syria.”

This is really shocking for us that why Churches wanted to resend the Christians back in such countries where the Persecution is on rise. And this is certain that the Christians living in Islamic countries are in serious threats, sending back such people is inhuman action, when deep in their hearts all the policy makers know well that they can be killed any time.

This is a time for individuals to stand together and fight for our brothers and sisters in Christ.