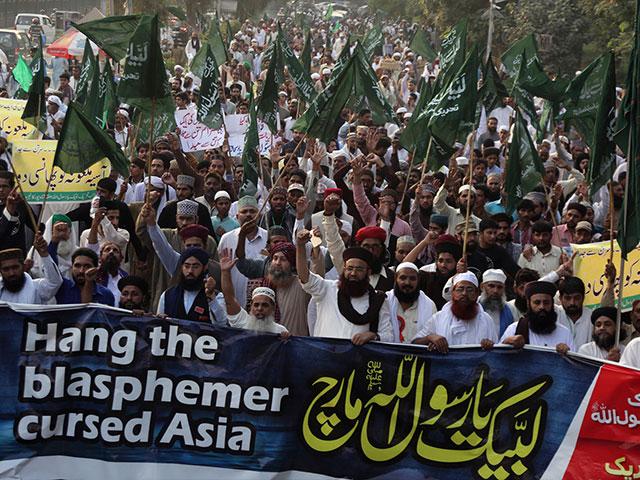 The Supreme Court of Pakistan, finally set aside a review petition of a Christian woman Aasia Bibi, accused of blasphemy, after spent more than 8 years in prison. The decision is being warmly welcomed by rights activists, local and international community. The judgement is unclear about the action against those who falsely accused her of blasphemy and gave false testimonies to mislead the court and public though. I’m not law expert but the law teachers said that ‘for every wrong, the law provides a remedy’. He who wrongs another is to be punished. But there are significant remarks by the Chief Justice of Pakistan (CJP) while grilling the petitioner’s lawyer.

All we can say is, ‘little drop of water in the mighty ocean’. CJP Khosa rebuked the witness for lying under oath, and added that they would have been jailed for life if the case wasn’t so sensitive. But there is provision in law if Aasia Bibi’s lawyer takes up the issue and files a case against those who falsely accused her of blasphemy, the courts would be morally bound to award a punishment to Aasia’s tormentors. But victims of blasphemy in Pakistan usually refrain from challenging the false accusers even after they are acquitted.

The UK Foreign Secretary Jeremy Hunt though welcomes this judgement during his launching speech on Persecution of Christians across the Globe independent review. He said, ‘I think the news about Aasia Bibi this week is extremely encouraging, but the truth is that unless we make a real effort and unless the world knows that we are making a real effort, those bits of good news will become the exception and not the rule. And that’s what we don’t want to allow to happen’. He also showed his concerns about the persecution of Christians in Pakistan and said ‘we particularly want to look at the issue of Christian persecution’. The US has already conveyed the concerns of the Christians persecution in Pakistan and Pakistan has been denying it.

As citizens, we have reciprocal rights and responsibilities. But in Pakistan, we have experienced that government always see the win win situation. In the late November, 2018 the Prime Minister Imran Khan laid foundation stone for Karatarpur Corridor. The gesture is a breakthrough between two neighbouring countries and Pakistan widely claimed as protecting minorities’ rights. Pakistan Foreign Office Spokesperson Muhammad Faisal told the media in Islamabad before leaving for Karatarpur that the opening of the Karatarpur border was the historic step for welfare of minorities. ‘It shows that Pakistan takes care of minorities,’ he said.

Undoubtedly this is a significant move by the Pakistani government, if the dream comes true as there are grievances from the both side. But if we see the govt is playing and protecting minorities’ rights are only slogans. A delegation of young Pakistani Catholics was prevented by government officials from flying out of the country to join the Jan. 22-27 World Youth Day in Pakistan. The Fides news agency reported that 14 young Pakistani Catholics with regular visas who were about to fly out to join the Catholic Church’s World Youth Day (WYD) in Panama were blocked at Lahore airport by Pakistan’s Department for Immigration Office. World Youth Day is an event for young people organized by the Catholic Church, which was initiated by Pope John Paul 2 in 1985. It is religious gathering and being organised every year by the Catholic Church.

The threatening letter to Churches issued by the local government is a clear violation of the Constitution of the country but also violating the international obligations. The Punjab government issued letter on January 02, 2019 saying to take all security arrangements and concerned departments are also directed to close/seal the Churches if in case failure of compliance of directives. While in the Constitution, the state is responsible to safe guard the rights and worship places of the minorities. Article 20 does not merely confer a private right to profess but confers a right to practice both privately and publicly. The state shall safeguard the legitimate rights and interests of minorities and the ultimate goal of the state should be to eradicate religious intolerance in Pakistan.

The sad reality is that such a policy exits on paper only. Religious and ethnic minorities continue to suffer discrimination. This continues despite the constitutional obligation to protect the life, property and worship places of all citizens regardless of their caste, ethnicity, religion or gender. The state plays the role of the bystander when human rights abuses occur at the hands of the powerful majority groups. Minorities have regularly been hoodwinked into believing that their rights shall be guaranteed and protected by the state. The state shall safeguard the legitimate rights and interests of minorities and the ultimate goal of the state should be to eradicate religious intolerance in Pakistan.