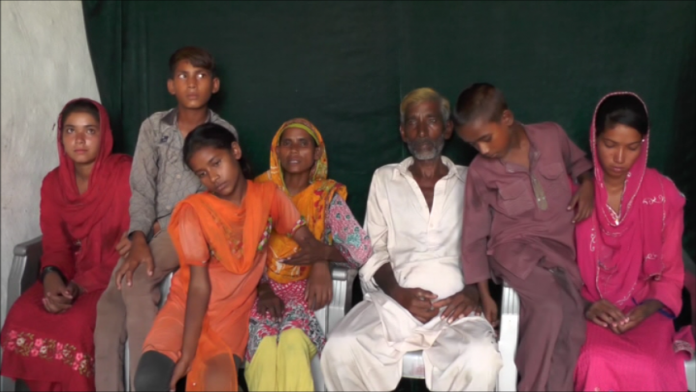 Bashir and Azra, a Pakistani Christian family, was enslaved in the Brick Kiln in Southern Punjab from last 30 years. Bashir took the loan even before his marriage to Azra Bibi for the treatment of his mother. Even after marrying with Azra, he worked hard to end their debt but was failed to get free from slavery. During these years together, they had 5 Children, 3 daughters, and 2 sons. All of them worked hard to end the miserable life they were living but all went in vain.

Listen to their story:

Like Other normal Children, Bashir’s kids wanted to go to School for a better life but they were not allowed by the system in which they were living. Its really hurting situation for all the parents when they know that they are unable to provide good education, food and other necessary needs. Similarly, every day Bashir and Azra went to their beds, hoping to have a better morning for their kids.
Recently, the family contacted our team and after a few weeks of planning, we were able to rescue this family of 7 from Slavery.

Still, there are hundreds of thousand Christian families who are trapped in slavery in brick kilns in Pakistan, India, and Nepal. They are waiting for their Savior who would come and save them from the curse of slavery.

Lend your hand to support these helpless Christians from slavery and end the persecution which is being transferred from generations to generations.