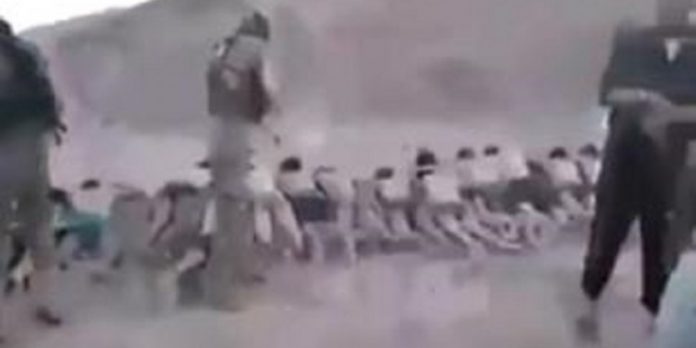 Another video has been made viral by an anti ISIS activist which shows the mass killing of about 200 Assyrian children by ISIS terrorist militants in Syria.

In the this latest video about 200 Assyrian children are forced to lie face down, side by side, in the dust with around a dozen militants behind them with assault rifles and machine guns. The video starts with one armed ISIS militant who opens fire, shooting each child individually, point black, soon all the others join in and start shooting children in all directions.

The ISIS terror group is known for its brutality and inhumane acts, however, the massacre of 200 Assyrian children is indeed the worst thing done by these savages. The reason behind the mass murder of 200 Assyrian children is not known, but it is believed that they were refugees and were trying to flee the violence in their own country because of which they were “punished” by the ISIS.

The video lasts for about 30 seconds and is so far the worst execution recorded by the ISIS terrorist militants who are known for filming public be-headings, dismemberment, running over with tanks and throwing people from tall buildings.  However, this recent massacre of 200 children is the worst of all and there are no words to describe or express the despicable atrocities carried out by these terrorists.

As the video went viral on the internet, it sparked a lot of anger and hate. One person on twitter, tweeted, “Beyond words…Shocking film shows jihadists massacring 200 Syrian children in mass execution.” While another called for Western intervention saying, “What will it take for the international community to take a hard stand against these guys? 200 children?”

Sadly, this incident is not one of a kind. Last year, ISIS targeted and killed 1,700 military cadets in Iraq in only a day and a half, in Saddam Hussein’s former presidential quarters. This war in Syria which started as a conflict has destroyed the lives of thousands of people and affects children the most. It is high time that the leaders of the major countries come together and find out a way to put an end to all this.