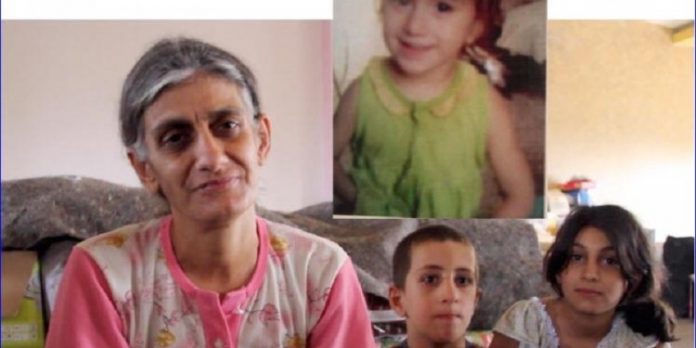 Christina Khader Ebada, a 3 year old, Assyrian Christian was abducted and kidnapped by the ISIS terrorists from her family when they were leaving Bakhdida in Iraq. The ISIS terrorists escorted the family, along with many other residents, to the Khazar checkpoint and told them to leave and never return.

The girl, Christina Ebada, was last seen by her mother crying and sobbing as a heavily bearded man carried her away. When her mother begged them to stop, they told her, “If you come close to this little girl you will be slaughtered; we will slaughter you.”

The  Family at that moment fled Baghdede (also known as Bakhdida) however, upon reaching safer grounds, they described what had happened to their daughter and pleaded the authorities to save her. According to the report published by the Assyrian International News Agency, Christina Ebada’s mother is physically handicapped while her father is blind and the the interview was conducted by Ishtar TV after the family reached a refugee camp in Ankawa, north of Erbil.

In the interview the mother described how Christina sat in her lap in the bus when a terrible thing happened. One of the ISIS militants came and snatched Christina from her and left the bus. The frenzied mother followed the man who carried her daughter inside a building. She said, “my little girl was crying. An old man, one of those ISIS people, who was apparently their leader, then carried her (away)”

Christina’s mom did not hesitate, but ran after the man and caught up with him inside. He was asked if it was her daughter to which she replied yes. “She is crying for you,” he said, without much feeling.

Hearing this he became furious and snapped, “Shut up. If you speak another word I will let them slaughter you. I will call them now to slaughter you.” Drawing his machine gun, he added, “Go quickly to the car. If you come close to this little girl you will be slaughtered, we shall slaughter you. Go!”

When the family reached Ankawa, Christina’s mom called on the world community in an interview, to take an action against this and help her get her daughter back. She said, “This thing that is taking place here in Iraq, to kidnap this little girl who is innocent, and these crimes they are committing, stealing money, they did not leave us anything, what is this? We appeal to human rights groups to help us, to look at us. This is not a humane situation. We can’t live like this all our lives. We have not attacked them. What have we done to them?”