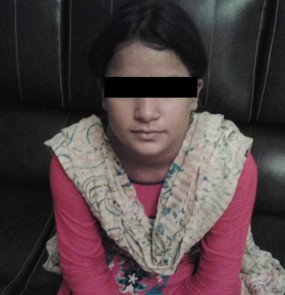 12- Sept,2013 Lahore  : Once again our brave team saves one more Christian girl from the Clutches of her abductors. Thanks to our Lord who is using us to save and protect the Christian community in Pakistan.

A few days before this incident occurred, these three men visited Nasir Masih and asked him to embrace Islam, which he refused instantly. Then, on August 22, while  Nasir Masih was at work, they entered the house and beat his wife and children before kidnapping Shama.

That night, Nasir Masih  along with some local Christians went to the police station to register a complaint against Umar Saghar, Muhammad Kashif and Shahid Nazir. However, instead of taking their application, the police stated that his daughter Shama had embraced Islam and was married to Umar Saghar. The police humiliated Nasir Masih and other Christians, threatening to put them in jail if they came back.

Nasir Masih went to several Christian NGOs and churches to help him to rescue his daughter, but no help was provided. Soon thereafter, Nasir Masih contacted our team  through one of the previous victims we had helped. On September 9, we investigated the matter. We engaged with some of the influential Muslims through our lawyers to help us rescue the young girl. After two days of meetings with Muslim clerics and influential persons, we were able to rescue Shama Nasir from Umar Saghar.

Initially, Umar Saghar refused to hand Shama over, stating that “she is his wife now and he will not return her.” Some of the Muslim clerics who backed Umar also stated that “she is Muslim now and you cannot take her back.” However, our team and a Muslim friend pressured Umar and Muslim cleric Qari Aslam to bring the girl to the meeting and to ask her if she accepts being a Muslim and remaining the wife of Umar. Then this matter would immediately be finished.

On the evening of the September 11 ,as soon as Shama saw her father she began shouting, requesting her rescue from Umar, saying that “she did not accept Islam and that Umar had forcibly put her thumb print on various papers.” Shama also said – in front of everyone – that “I want to go with my father.”

Our lawyer warned Umar that if he would come after the minor girl again then he would take serious action against him. He furtherly  told Umer ,that we will conduct Shama ‘s  medical checkup and if she was sexually assaulted then we will also file a case of abduction and rape. As Umar and his companions left, they made threats against all of us. Then after we immediately  moved Shama and her father to Lahore City for their protection from Umar and his companions.

Today, we have sent Shama for a medical and DNA report. We have also filed the application in the Court for registering a FIR (criminal complaint) against Umar and his associates. However, according to Shama, she stated that Umar raped and tortured her many times. We hope that this minor Christian girl will get justice.