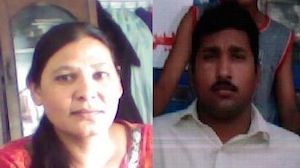 FSF-Lahore-Pakistan:  We would like to give you another depressing news that after Sawan Masih, Today on 4th April, 2014, Additional Session Judge toba Tek singh Main Amir Habib has awarded a death sentence to Shafqat Emmanuel and Shagufta Kasuar .

Since the trial began we were indicating this to the apexes courts that Main Amir Habib is favoring and supporting the complainant and his lawyers. Even we filed the Application to the MIT and Other respectable forums but No one Paid any heed to our applications. Last year on 21st July ,a Crippled Christian man, Shafaqat Emmanuel and his wife Shagufta Kausar were arrested in Gojra District for allegedly sending the Blasphemous text messages to the Local Muslims. Police registered an FIR 407/13 under section 295-B and 295-C. Complainants, Muhmmad Hussain and Tehsil Bar Association President, Anwar Mansoor Goraya alleged to receive the blasphemous Text messages from the number registered on Shagufta Kausar’s name.

Farrukh Saif is taking care of this persecuted couple and 4 minor children, since July,2013.

However our lawyer’s submitted the record of the SIM card that neither it is registered on the name of any of our victim nor the record of the text Messages was proved to be sent from that SIM Card. The Most important thing was that both of them were uneducated and cannot send any message in English .

But Kangaroo Justice is going on in this Country CALLED PAKISTAN and I hope this news must have brought joy and contentment to the hearts of Pakistani Muslims. From the last five months we are yelling in front of the International community that all the victims of blasphemy Law will be awarded with the same punishment and now after Shagufta Kausar and Shafqat Emmanuel, Pastor Adnan and Asif Pervaiz will be given death sentence shortly. If a bold step would not be taken from the Christian community soon then it would become impossible for them to live in Pakistan