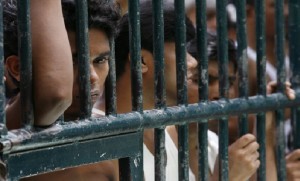 29th Sept,2016 – Bangkok : Since last two years we are bringing the attention of the world towards the vulnerable Pakistani Christians who are stuck in a limbo in Bangkok but till day the world is unable to recognize the Religious Persecution of Christians taking place in Pakistan.

The PEW Research Center, Open Doors, Human Rights Watch and US State Department have declared Pakistan a dangerous country for religious minority but for UNHCR, these asylum seekers and refugees are economic migrants. If UNHCR don’t consider these reports of religious persecution in Pakistan then they need to change their measuring tools.

Couple of days ago when I heard that UNHCR Bangkok has closed the file of “Talib Masih”,  I was shocked because if UNHCR is rejecting the cases like Talib Masih, it clearly indicates that they are not interested in providing  justice to the Pakistani Christians.

Many of you are thinking who is Talib Masih??  For your information, I would like to take you to 2009 in Gojra city, where on false rumors of a Quran desecration at a Christian wedding in the eastern village of Kurian led to violent demonstrations that climaxed August 1, 2009 in the destruction of more than 100 Christian houses in nearby Gojra.

Seven Christians were killed in the mob violence; including six family members were burnt alive in their home. However Pakistani authorities clearly stated in Judicial report that “the Quran desecration allegations were unfounded and that banned Sunni extremist groups in the area had incited the attacks.”

This whole episode was started on 24th July 2009 in Kurian village on the wedding of Mukhtar Masih’s daughter, where Talib Masih , Mukhtar Masih and Imran Masih (Muhktar ‘s Son) were accused of desecration of the Quranic pages. Local police station of Gojra registered an FIR bearing No-426/2009 against them.

In the same week dozens of Christian homes were burnt by the extremist Muslims in Kurian including the houses of Talib and Mukhtar Masih. These series of attacks ended in Gojra Christian colony on 1st August after looting and burning and killing Christians.

Talib Masih and Mukhtar Masih were supported by different organizations in different times. Firstly Talib was provided Safe home by Joseph Francis and the then Christian organization CDI.  Around for two and half year Talib Masih was in hiding and CDI was making efforts to get the CNIC cards as during the riots, CNIC cards and other documents were burnt as well .It was impossible for Talib Masih to go to Gojra union council to get the copy of the duplicate ID as every Muslim in the Gojra city was his enemy .

After long struggle CDI was able to get his new ID card and immediately they helped him to get out of Pakistan. Talib Masih reached Bangkok with the hope that he will be accepted as a refugee but UNHCR rejected his case and even closed his file a month ago.

Whole of the world is aware what had happened in Gojra city but UNHCR is failed to protect Talib Masih. Despite knowing the fact that after such charges no any person can survive in Pakistan, UNHCR has refused Talib Masih’s case.  We have several examples of mob violence where the Muslims have killed innocent Christians with blasphemy allegations.

It is not easy for any Organization to relocate and protect such victims, in last 8 years we have done that many times by rescuing such people and we know how difficult it is but it was very easy for UNHCR to reject and close the file of such a victim.

Currently, we are working on Talib Masih’s case to be re-opened by the UNHCR as well as our friend organization is working on to relocate him to a safer country.